It was a different Sunday that I woke up to. It was the day of reckoning, the day of my first duathlon experience, I would be joining the Urban Duathlon at Tiendesitas. I will just be doing the Beginners Category 2.5K run, 4K bike and 2.5K run, it’s just a short distance but the butterflies in my stomach won’t leave me alone. I was awake at 3AM, didn’t get the much-needed sleep because of the excitement. 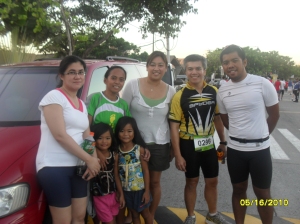 We (beginners) were the last to go, my plan was just to finish, I joined this race because Erick convince me too for me to experience duathlon. I would take my time and enjoy every second of it. The first run was nice, I was in no hurry, but I was still overtaking some runners.

It was at the bike leg that I was a bit nervous, knowing that the road was not closed for traffic, since my plan was just to finish, I literally took my time in this leg, I would slow down every turn, what terrified me was when I was cut by an FX along E. Rodriguez Avenue, the organizers overlook this one. But praise God that nothing bad happened to me.

Brick training is the key to any multi-sport, during mine I told Erick that it was easier to run then bike rather than bike then run. My legs didn’t feel anything but I was trying my best to complete the race. During the second run, I was running and walking, just to finish I said to myself, it would be more than enough for me. And 58 minutes and 3 seconds later I was crossing the finish line, it was a sigh of relief, a taste of victory. I felt great after finishing the race. Praise God! 🙂 Thanks Erick for the pictures. 🙂